The global state of emergency around the Corona virus or COVID-19 has changed the working world enormously in a very short time. While a very large number of office workers were able to work from their homes, manufacturing companies had to deal with an important question: How can they fulfill their duty to protect the health and well-being of their workers, as well as ensuring the recommended minimum distances between their employees?

It is not always possible or sufficient to change the working environment so that the specified safety distances can be maintained. Some tasks cannot be performed without a "helping hand". These circumstances have brought collaborative robots or cobots to the fore as a possible solution. With this technology, even small and medium-sized companies can automate numerous tasks or work steps, which means that they can continue to produce as consistently, efficiently and safely as before.

What speaks for cobots to enforce "social distancing"?

Cobots have been specially developed to relieve employees of particularly repetitive, monotonous and physically demanding or dangerous tasks. This relieves human workers and at the same time supports and improves their efficiency. In turn, these employees in the company can perform more demanding tasks that cannot be automated with the help of machines.

Due to their typically long robotic arm, cobots can create a greater distance between employees, which means that the recommendations for distances at the workplace can be followed in times of the Corona pandemic. Cobot Sawyer, for example, has an arm length of 1.26 meters and is therefore able to move parts from one workstation to another without the employees getting too close to each other. The fact that Sawyer is easily accepted as a "new colleague" by the workforce is primarily due to his friendly design and the animated "face" of the cobot. This significantly reduces hurdles or fear of contact in the interaction between humans and robots.

An important advantage of cobots is that they are quick and easy to program. Even laypersons can quickly set up Sawyer with its Intera operating system so that the cobot automatically carries out his first movements and tasks. Thanks to the integrated camera systems and the Intera software, Cobot Sawyer can orient himself dynamically and flexibly, as well as adapt to his environment. Movements, which have already been saved in the system, can be referenced using landmarks and cameras. This means that even after a change of location, Sawyer can recognize his landmarks, align his movements with them and continue with the programmed action. This promotes quick and flexible operational readiness, since the cobot does not have to be reprogrammed every time it gets moved around the workspace.

The market development for collaborative robotics

We see a steadily growing demand for flexible, easy-to-install and inexpensive robot systems that can be operated using cobots. In combination with automatically guided vehicles (AGV) and autonomous mobile robots (AMR), there are even more versatile possibilities for the automation of processes in companies, but also within clinics, laboratories and smaller craft businesses.

Our sister company HAHN Robotics, also part of the HAHN Group, acts as an integrator and service partner for all types of robot automation. One solution the company is working on is the combination of our cobot Sawyer and MiR - Mobile Industrial Robots. By mounting the cobot on an AMR, there are diverse areas of application for changing the cobot's workplace, transporting means of production or loading and unloading machines. In the clinical environment, it would also be conceivable that a combined system of cobot Sawyer and AMR is used for laboratory applications during the night shift, or that smaller operations such as controlling valves or operating some diagnostic devices can be carried out by the cobot. For the often understaffed specialist staff, this makes every day work easier, leaving more time for particularly demanding tasks and personal care for the patient. 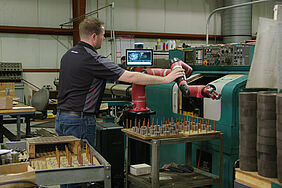